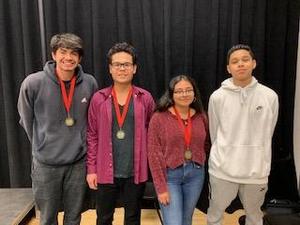 The California Educational Theatre Association (CETA) supports and represents theatre and its educators throughout the state of California. Most recently, LAHSA’s 2018 fall production of A Flea in Her Ear was entered into the CETA festival. Adjudicators went to different dates of the show and critiqued everything from the ushers in the house, to the actors and their costumes on stage. Those awarded a certificate of achievement for acting were: Justise Barrios, Christine Deodanes, Natalia Echeverria, Kevin Lopez, Jonathan Nunez, Jeanette Rios, and Daniel Valerio. Those who received one for their design/tech work were: Kimberly Cortez for stage managing, Simon Jeon for costume design, and William Lopez for set design. Jonathan Nunez and Kimberly Cortez were awarded the Director’s Award, given by the production’s director. Justise Barrios and William Lopez were awarded an Adjudicator Award; each adjudicator may choose one award for all productions they watch.

The adjudicators wrote feedback that the director, cast, and crew were able to read, to see what worked and what can be improved on during the next production. Congratulations to all those who were recognized for their work and thank you to CETA and the adjudicators for supporting the arts!